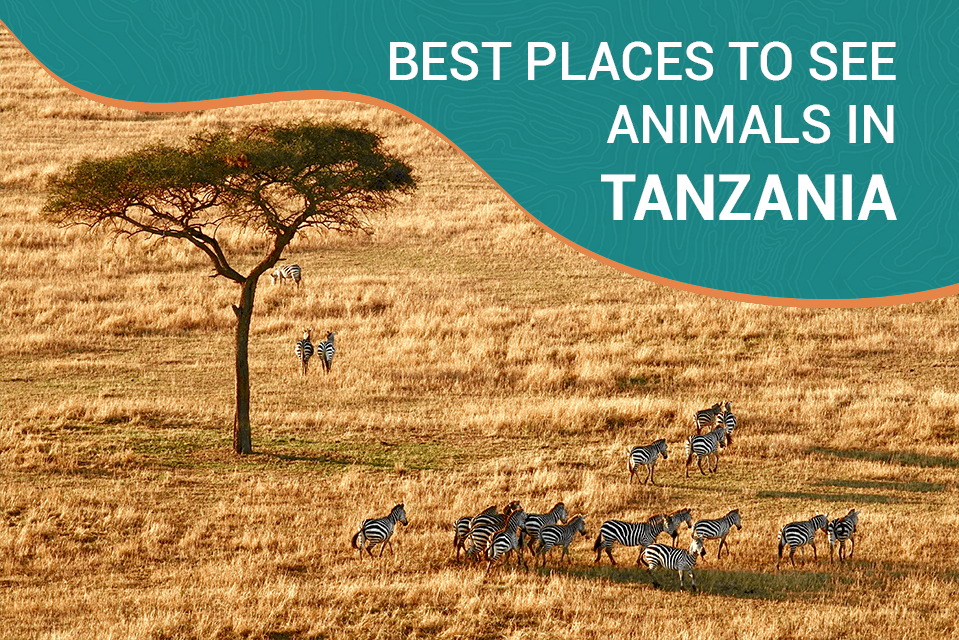 Our handy list of the best places to see animals in Tanzania includes Tanzania’s iconic national parks and reserves, known for their abundant wildlife.

Although Arusha isn’t home to the big five, it has plenty of giraffes, buffaloes, and zebras. On most Arusha safaris, the game vehicles will stop at the Ngurdoto Crater – a volcanic crater with a swamp floor. Ngurdoto Crater is surrounded by forests and is a great spot to see several species of antelopes, buffaloes, elephants, and warthogs. The Momella Lakes include the Big Momela, Small Momela, El Kekhotoito, Kusare, Lekandiro, Rishateni, and Tulusia. Giraffes and buffaloes are also commonly spotted around the banks of these rivers.

Lake Longil, the only freshwater lake in the park, offers safari visitors a chance to see buffaloes and waterbucks in their natural habitat. The Tululusia Hill and waterfall region within the boundaries of Arusha National Park is an excellent wildlife viewing spot. A few fortunate visitors have come across tree-dwelling pythons, red duiker, and leopards on their safari.

Mount Meru’s fertile slopes, savannahs, and forests also host diverse wildlife. In the forested regions of the mountain, you’ll find colobus monkey, olive baboon, and red-tailed monkey, whereas giraffes and zebras can be seen grazing in the savannas.

At Lake Manyara National Park’s entrance, you’ll be greeted not only by the park’s staff and guides but also by its resident primates such as the blue monkeys and olive baboons who inhabit the forest patch at the park’s entrance.

Visitors anticipating their visit to the Lake Manyara National Park have a lot to look forward to, beginning with the tree-climbing lions that have shown a preference for acacia trees. Several studies have tried to pinpoint the reason for this behavior of the lions in Lake Manyara National Park. Some claim that the lions climb the trees as they offer a great vantage point while another theory suggests that the lions started climbing trees to escape epidemics of flies and mosquitoes, a trick mimicked by future generations.

Lake Manyara attracts thousands of migratory birds. Amongst these are the pink flamingos covering the lake surface, creating a stunning contrast over the ash-colored waters of the lake. The park’s hippo pool, located on the northern shores of Lake Manyara, is one place where you have guaranteed hippo sightings.

Refer to the list of birds in Lake Manyara National Park to find out about other bird species.

The prime time to see the wildebeest migration in the Serengeti National Park is between June and September, although the Serengeti is a superb year-round wildlife viewing destination. During the dry season (July to October), the lack of vegetation makes it even easier to spot wildlife. Check out our detailed wildebeest migration infographic to see the annual progression of the migration. Based on your preferences and timelines, you can choose the best time to visit the park.

The marshes of the Mara River are home to Nile crocodiles, one of the deadliest predators of Africa, as well as hippos. Serengeti is one of the best places to spot three of the big five in Tanzania, with its high concentration of elephants, buffaloes, and lions, while a few lucky safari-goers might also catch sight of the rarely seen black rhino and leopard. In addition, Serengeti is one of the places in Tanzania with a sizable population of cheetahs while spotted hyenas, black-backed jackals, and golden jackals are always following the lead of the apex predators, the big cats. These hunters will either try to steal their prey or scavenge on their carcass.

During the migration, the Grumeti River offers a great view of mega herds crossing from its banks.  Located in the park’s western corridor, the Grumeti River’s remote location offers visitors a break from crowds. Additionally, visitors will also have frequent sightings of Nile crocodiles, elephants, cheetahs, giraffes, and lions throughout the year.

Ruaha National Park’s namesake, the Ruha River, flowing along the park’s southeastern border, offers the perfect spot for game viewing. Another river, the Njombe, travels through the park’s rocky landscape and gorges. Visitors can see Nile crocodiles basking in the sunlight on the banks of these rivers. Several animals frequent these water sources to quench their thirst, among them are herds of elephants, buffalo, giraffes, impalas, and kudus. There’s also a chance of spotting one of the numerous predators such as wild dog, cheetah, leopard, and spotted hyena.

Ruaha National Park’s primary attractions include its large concentration of elephants and lions. It is also amongst Tanzania’s essential Lion Conservation Reserves, protecting its lion population.

Rufiji River, Lake Tagalaga, and several Selous waterholes are often visited by the park’s wildlife, including giraffes, zebras, impalas, buffaloes, and waterbucks, and often predators aren’t far behind. If luck has it, you might even get to witness a lion hunting its prey. Selous is popular for adventurous safaris including walking safaris, allowing visitors to explore the wildlife’s natural habitat close up, and superb boat trips.

Tarangire National Park is ideal for people who want to see large herds of elephants in their natural habitat. It has the largest population of elephants in Tanzania and four of the big five African animals – leopards, lions, buffaloes, and elephants. Primates such as troops of baboons and vervet monkeys are commonly spotted all over the national park. Vervet monkeys especially congregate around the park’s picnic areas and aren’t above stealing your meal.

Tarangire’s water sources and swamps are ideal spots for seeing hippopotamus. Amongst the predators, you are more likely to see a lion than any other species, such as leopards, cheetahs, and African wild dogs. Tarangire is also known for its tree-climbing pythons, forced to seek shelter when the swamps dry up.

Ashy starling, red-and-yellow barbet, red-bellied parrot, speckle-fronted weaver, and tawny eagle are five of the commonly spotted birds in the Tarangire sky. The park has over 500 bird species, best viewed in the period between November to April.

As well as a wealth of wildlife, Ngorongoro Conservation Area is also one of the best examples of local communities living in harmony with wildlife. There are around 100,000 Maasai living here, looking after their livestock without impacting the wildlife. In addition, there are fascinating landmarks to see in the conservation area, such as Nasera Rock, Olduvai Gorge, Oldonyo Lengai, Empakaai Crater and of course the renowned Ngorongoro Crater.

Rich in wildlife, Ngorongoro Conservation Area is home to cheetah, one of the most commonly spotted predators here. They roam the plains outside the crater in the Lake Ndutu region. Giraffes cannot reach the crater surface and can also be spotted outside the crater. The big five can be seen in the Ngorongoro Crater itself and it’s one of the best places to spot the black rhino. Lions can also be seen prowling the grasslands in the Lake Ndutu area while buffaloes and elephants are seen throughout the conservation area, from floodplains to swamps and savannahs. The elusive leopards can be seen within the rainforest at the crater’s rim.

Visitors can head over to either the Gongor Swamps or Mandusi Hippo Pools to catch sight of the park’s hippos. The rare black rhinos can also be found in the Gongor Swamps. Ngorongoro Conservation Area lies in the path of the annual wildebeest migration from Tanzania to Kenya and back. To see the wildebeest migration in progress, visitors need to plan a trip for December to February. During this time, the wildebeest are in Ngorongoro, and it is the calving season.

Flamingoes are found all over Tanzania, from Lake Manyara to Ngorongore’s crater lakes. Every year, thousands of flamingos inhabit the lakes during the wet season, making it an ideal time to spot these beautiful birds. They can be spotted at Lake Ndutu, Empakaai Crater Lake, and Lake Magadi. These crater lakes also attract the great white pelican, breeding in the shallow lakes and swamps. So don’t wait, take a Safari trip to Tanzania soon!