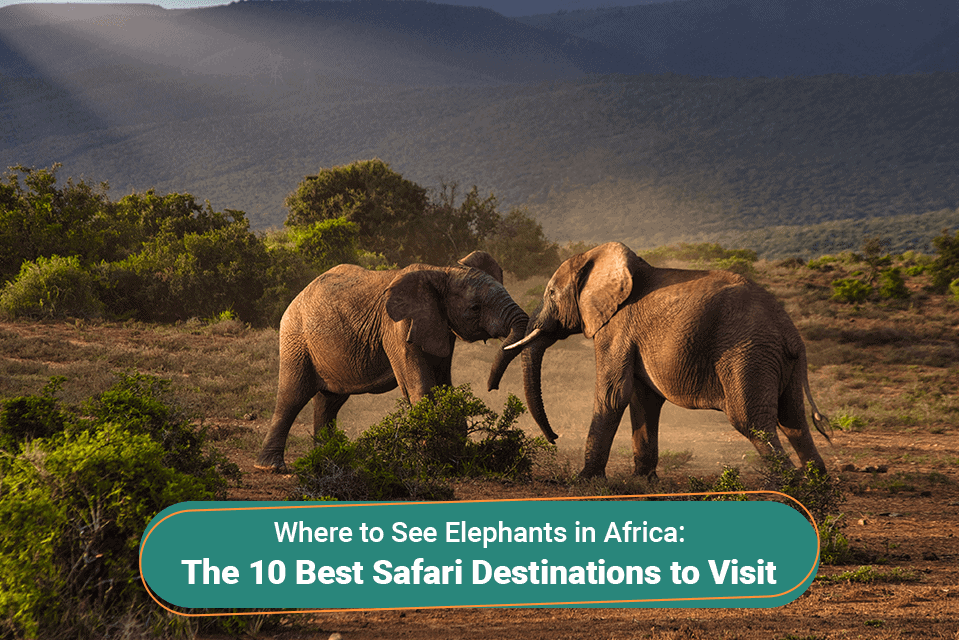 In some regions, the elephants have adapted to harsh climates, such as the Sahara and Namib deserts, but due to the lack of water, it is not so easy to see these elephants in the desert regions. It is more common to see them in landscapes of  open plains and lush vegetation. To help you decide where to head to spot elephants, we have curated a list of Africa’s premium safari destinations with the largest populations of elephants in Africa.

In the dry season, elephants gather around the Chobe and Linyanti Rivers, so a boat cruise along the river or game drive along the bank  is perfect for watching elephants.

Chobe National Park is home to all of Africa’s big five animals, including the elusive leopard and the endangered rhinoceros, as well as being a renowned birding destination.

Hwange National Park has the largest elephant population in Zimbabwe. In fact Hwange’s wildlife authorities are struggling to handle the elephant overpopulation with the adverse effects it has on the ecology. However, from a safari perspective, Hwange offers excellent chances of spotting large herds of elephants throughout the park.

In addition, the Hwange ecosystem is home to around 500-700 lions as well as the remaining big five animals and many more wildlife species together with diverse bird life.

Although Okvango’s elephant numbers may not be as staggering as that of Chobe National Park, it has a decent elephant population. The Okavango Delta’s unique ecosystem is known for its seasonal flooding that replenishes the region’s water sources while the Delta itself provides a perennial water sources attracting elephants and much other wildlife throughout the year.

Selous is also one of the few wildlife reserves where you can see the puku antelope, sable antelope and African wild dog. Game activities include walking safaris, game drives, boat trips and, for the more adventurous, fly camping.

Best months to visit: May to September

Kruger National Park, one of Africa’s biggest wildlife reserves at nearly 2 million hectares, has one of the largest elephant populations in South Africa. Kruger’s current elephant population is a credit to the rigorous conservation methods of the park authorities and other non-profit organisations. Due to their large numbers, it is fairly easy to spot these huge mammals throughout the park.

South Africa’s oldest national park, Kruger is home to the big five as well as hundreds of other wildlife species and over 500 bird species.

The river channels and small lakes of Mana Pools are an ideal habitat for a healthy population of hippos and Nile crocodiles. The park is one of the best places to go on a boat or canoe safari, watching the wildlife as they drink at the river.

This vast area has remarkable biodiversity and diverse landscapes including acacia scrub, savanna grassland, woodland and riverine forest. It’s home to many species of wildlife including the critically endangered hirola.

Tanzania’s most popular park, Serengeti National Park is well known for its wildebeest migration, it has many other attractions, including a good concentration of elephants, iconic big five, more than 500 bird species, herds of wildebeest and zebra.

In the Serengeti, elephants are an impressive sight, roaming the plains, wandering into the woodlands and drinking from waterholes.

Number of Elephants: Over 3000

Amboseli is also a great birding destination with some rare and endangered bird species, such as the Egyptian vulture, and is home to four of the big five (no rhinos).

Last, but by no means least, on the list of the best elephant safari destinations is Kenya’s Masai Mara National Reserve. The Masai Mara has a large concentration of wildlife and a bounty of attractions, with elephants often seen on the plains, around the marshes and in the riverine forests. The population of elephants is steadily rising due to the hard work of the rangers, Masai community and the government.

The Masai Mara National Reserve also plays its part in the annual wildebeest migration of over two million wildebeest, zebra and other antelope as they cross the Mara River from Tanzania into Kenya.

Other African safari destination where you can see elephants: