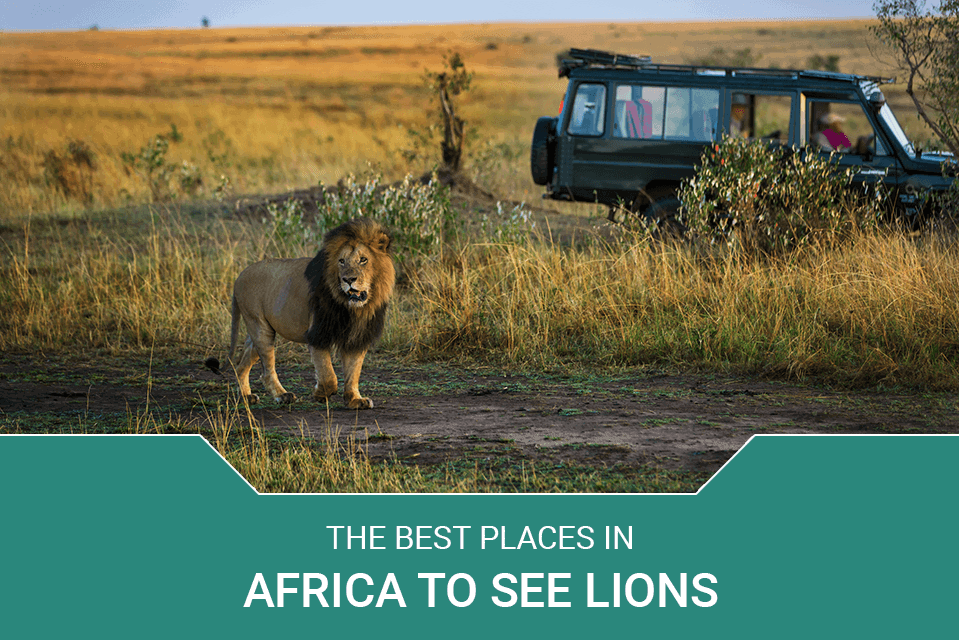 One of Africa’s renowned big five animals, the African lion is one of the top wildlife species that visitors to Africa aim to see on their safari. According to the World Wildlife Fund (WWF) there are only 23,000 African lions left in the wild, which accounts for the majority of the world’s lion population. African lions are spread across sub-Sahara Africa in West, Central, East and Southern Africa.

Our list includes the best places to see lions in Africa in East and Southern Africa, where it’s easiest to spot lions in the wild, provided that you visit the right location at the right time in addition to having the knowledge and experience of a professional guide on hand. We have also shared the last known estimated number of lion populations for each safari destination.

It shouldn’t come as a surprise that Tanzania, the home of the great wildebeest migration, also has the largest population and density of African lions. Of Tanzania’s 15,000 lions, at least 3,000 live in Serengeti National Park in northern Tanzania.

The Serengeti National Park and the Serengeti Plains offer the chance for great views of these majestic predators, often seen stalking their prey. They follow the large herds of wildebeest, zebra and other antelope species during the annual migration, giving visitors more opportunity to see a lion hunting during the wildebeest migration compared to other times of the year. In Serengeti, the central Seronera region is the perfect spot for good lion sightings.

According to the Ruaha carnivore project, Ruaha National Park in southern Tanzania is home to over 1,000 lions. While these numbers may be lower than Serengeti’s, Ruaha is more secluded and wild, and it may be more challenging, but even more rewarding, to see lions in this remote wilderness.

Ngorongoro Crater has a high density of lions in a small area because the walls of the crater create an enclosure, which prevents significant movement of lions in and out. However, this does mean that the lion population here is inbred due to few male lions entering the crater bringing new bloodlines, meaning that genetic problems can be passed down from generation to generation. The mostly flat landscape of the Ngorongoro Crater allows for good lion sightings particularly during the dry season as the wildlife gathers around the water sources.

In Tanzania’s Lake Manyara National Park there are unique tree-climbing lions which can be seen lying in trees during the day, perhaps to escape the heat of the day or to view their prey from a high vantage point.

Best months to visit Botswana for lion sightings: May to October

While the lion population of Botswana may not be as large as Tanzania, it still has Africa’s second-largest population of lions. The lions in Botswana, especially around the Duba Plains area of the Okavango Delta, are considered to be the biggest in Africa, with well developed front quarters from catching prey in the water – this is a unique characteristic as usually lions avoid water, but in the Okavango Delta buffaloes are one of the prey for the Duba Plain lions and they often take down large buffaloes in the water. These lions also hunt during the day, making it possible for safari visitors to catch them on a hunt.

The Savuti region, a remote corner of Chobe National Park, is another great spot to see lions on the wide open savannah as well as other predators, such as leopards, hyenas, and African wild dogs. When such large predators share an area, there are frequent clashes that safari visitors might get a chance to witness – the Savuti lion pride has a fearsome reputation for its skill in hunting elephant.

The Xakanaxa Lagoon, located in the heart of the Moremi Game Reserve where the Kalahari sands meet the waters of the Okavango, is a wildlife paradise and another excellent place to see lions, and plenty of other game.

Kenya’s Masai-Mara National Reserve plays an important part in the annual great wildebeest migration, when millions of wildebeest, zebra and antelope migrate from the Serengeti Plains in Tanzania to the Masai Mara in Kenya looking for fresh grazing. The migration offers a perfect feeding opportunity for Kenya’s predators, including lions. Some even follow the wildebeest to the river crossings, where the animals face dual attacks, from the ground predators, including lion, cheetah, leopard, wild dog and hyena, and from the crocodiles in the rivers.

Masai Mara National Reserve has over 850-950 lions, a large portion of Kenya’s lion population, while Nairobi National Park has 45 lions, and Amboseli National Park over 100 lions. Other national parks and game reserves across Kenya have lions, but their numbers are lower so it’s harder to spot them on a safari.

Best months to visit South Africa for lion sightings:  May to September

Based on the data collected by sanparks.org, there are approximately 1,620-1,750 lions in South Africa’s Kruger National Park, which accounts for most of the lions in South Africa. Sabi Sands Game Reserve, a water-rich territory located within the Kruger Conservancy, is a great spot to see wildlife, including lions.

To see the unusual white lions with snowy fur, head to the Timbavati Game Reserve, located on the western edge of Kruger National Park. These white lions have leucism, a condition which reduces pigmentation. They can also be seen in Pumba Private Game Reserve and Sanbona Wildlife Reserve in South Africa.

Kafue National Park, bigger than the Kruger National Park and one of the largest national parks in Africa, is home to approximately 500 lions, which are often found close to herds of puka and lechwe, the main source of food for lions here. Kafue National Park is considered a lion ‘conservation unit’ together with South Luangwa National Park.

Similar to the Kalahari lions, the lions of Namibia which live in the Namib Desert in the Kunene region (Damaraland and Kaokoveld) in north-west Namibia, have also adapted to their unique ecosystem. Finding prey and vegetation can be hard in the harsh desert conditions so they have adapted by needing less water to drink, having smaller prides and fewer cubs so there are less mouths to feed, and eating seals and cormorants as well as antelope and ostrich.

In 2021, there were around 305-366 lions individuals in the Etosha region, the largest population in Namibia and 130 in the Kunene region. Although the Kavango and Zambezi regions also have a few lions, sightings are rare here.

Where can you find the lion’s habitat? 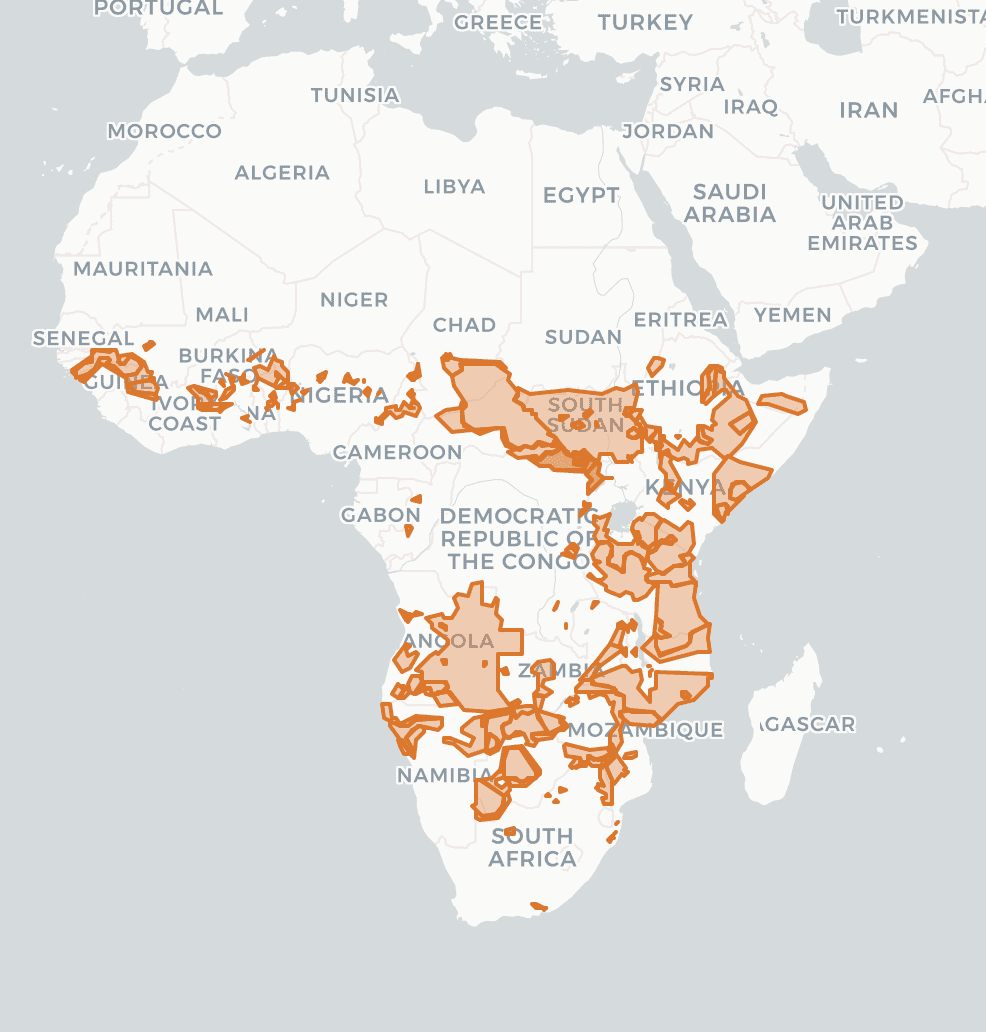