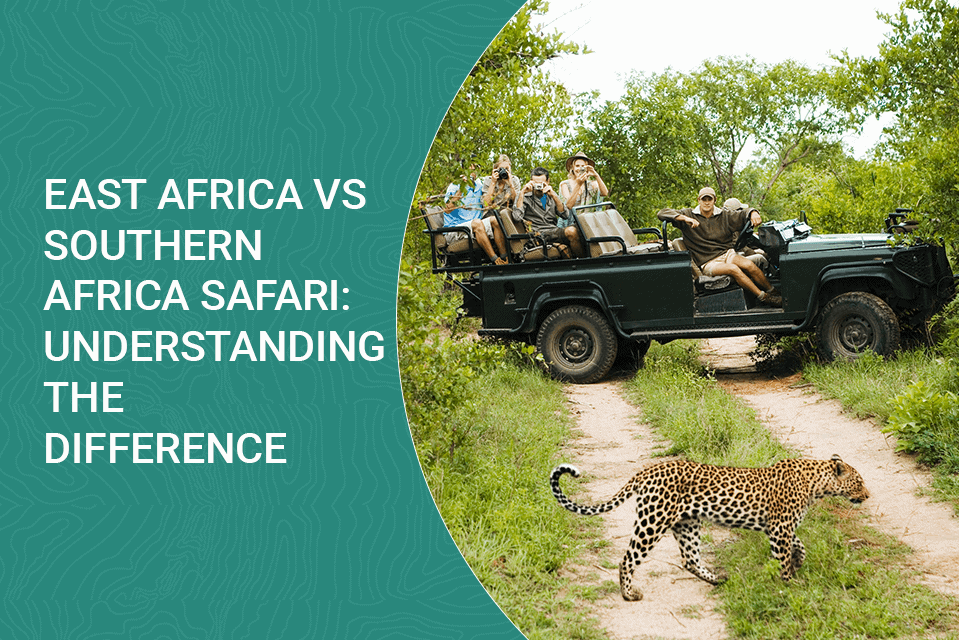 The landscape varies greatly across the different countries and regions within countries: dense forests, wide open plains, stark deserts, craggy mountains, sparkling waterways, beautiful coasts and much more. It stands to reason that the wildlife experiences are also vastly different. Not only because of the animals you find in these different locations but also the way that you go on safari. A game drive in Botswana’s Okavango Delta is very different to one in Tanzania’s Serengeti National Park.

A safari in East Africa can be either an overland or a fly-in or a combo of both. With an overland safari you have your own guide and vehicle, which stays with you as you drive between parks. In Tanzania, the most popular route is the Northern Circuit which includes Tarangire National Park, Lake Manyara National Park, Serengeti National Park and Ngorongoro Crater and generally starts and ends in Arusha. You stay with the same guide throughout the safari and build up a great relationship as you travel from camp to camp.

In contrast, in Southern Africa, you generally arrive at your bush location via small charter flight or vehicle and are met by the lodge team who then look after you for the duration of your stay with them. Game drives are conducted in the morning and the evening with the lodge/camp’s team of guides, with a break at camp during the middle of the day to recharge and relax.

The wide open spaces in East Africa, especially in Kenya and Tanzania, have no fences. The wildlife is free to roam and migrate. South Africa, on the other hand, is more confined as the national parks and reserve borders are fenced although the areas of wilderness, parks and reserves is enormous so the wildlife has huge tracts of land to roam through.

Let’s take a look at what both have to offer their visitors.

There is a huge animal diversity in Tanzania and Kenya. Tanzania, one of Africa’s leading safari destinations, has 22 national parks and is home to at least 20% of Africa’s big animal population. Serengeti National Park, the center for the world’s renowned wildebeest migration, is home to over 3,000 African lions. Kenya has 54 national parks and reserves, the largest is Tsavo National Park while the most well-known is Masai Mara National Reserve.

Both the Masai Mara National Reserve in Kenya and the Serengeti National Park in Tanzania offer the ultimate wildlife viewing experiences in the form of the annual great migration. Visitors have the unique opportunity to see the large herds of game animals, predators lying in wait, and the birth of the next generation of wildlife. It is also possible to see the big five, a huge array of bird life and other interesting smaller animals at this time and throughout the year.

Tanzania’s Serengeti Plains and Kenya’s Masai Mara deliver on the promise of large open plains, endless horizons and numerous game viewing opportunities. The stunning open plains dotted with acacia trees create a stunning vista seen in thousands of iconic and splendid pictures. Even during the peak season, when the parks can be more crowded, these vast open spaces offer visitors the freedom to explore the wilderness at their own pace.

Tanzania and Kenya are not only home to spectacular swathes of wilderness, there are beautiful beaches too, ideal for a bush and beach safari combination. The Swahili Coast includes main destinations such as Mombasa, Malindi and Lamu in Kenya, Dar es Salaam and the island of Zanzibar in Tanzania, and offer stunning places to relax after a wildlife safari.

Southern Africa is packed with a huge variety of landscapes spread over an enormous land mass. From the hot, dry desert of Namibia to the waterways of Botswana’s Okavango Delta, from South Africa’s picturesque coastline to Zimbabwe’s mopane woodlands, and a wealth of different ecosystems in between.

A unique destination in Southern Africa, the Kalahari Desert is one of the largest deserts in Africa. At 900,000 square kilometers, it covers the major portion of Botswana and smaller parts of South Africa and Namibia. The Kalahari Desert is a unique place to visit and includes the well-known Makgadikgadi Salt Pans and Central Kalahari Game Reserve.