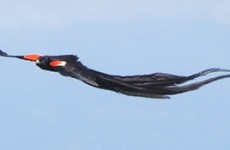 You have chosen a fantastic safari! Please fill in the form below to send an enquiry directly to 'Bush Trucker Tours' Let us know how you get on by signing up and leaving a review. 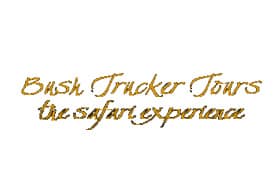 From soda and fresh water lakes in the Great Rift Valley and Kakamaga’s ainforest to the mountain forest and moorland in the Aberdare mountains, you will encounter a wealth of bird species, some found country-wide, others in specific regions. From September to April Eurasian migrants are also present. You’ll be accompanied by your ornithological guide Joseph Aengwo, who has been studying birds since he was very young. He was born on the shore of Lake Baringo, one of the best birding spots, and contributes a lot to local conservation. By leading professional birding tours in East Africa he has experience in all regions.

High Season (July to May)

From USD 3,000 per person, based on 6 guests sharing, travelling in one Land Cruiser

From USD 3,270 per person, based on 4 guests sharing, travelling in one Land Cruiser

Upon your arrival in the evening you will be met and driven to the hotel, which takes about 30 minutes.

Your ornithological guide Joe Aengwo and your safari driver/guide will pick you at the hotel in the morning. Now you start the journey over the rim of the Great Rift Valley where you stop to look at the volcanoes Longonot and Suswa. In the later morning hours you will check in at Lake Nakuru National Park and start with a game drive to the lodge. Lunch is taken on the terrace from where you have a beautiful view to the lake. In the afternoon you explore the lake shore, the yellow-barked acacia forest and if time is sufficient also the drier part of the park. Beside the over 400 bird species you can find the rare Rothschild giraffes, black and white rhinos, leopards, lions and various herbivores.

Birds of prey are common in this park, among them are augur buzzards, long-crested and snake eagles. Since the park has different biotopes you find different bird species accordingly. Colourful finches and sunbirds, bee-eaters, ibises, flamingos, pelicans, starlings and the less conspicuous pipits and chats. Ducks, geese and plovers cannot be missed as well as migrants which can be found at the lake in the form of small plovers and others in the forest from October to April. Morning and afternoon game drives. Lunch in the lodge. Walk around in the lodge compound, it is absolutely worth it! You will be surprised what kind of birds you can find.

You start the long journey early to reach the lodge for late lunch, driving on the East African Highway passing villages and crop fields. The afternoon is spent in and around the compound. Many different birds as well as Matschie colobus, red-tailed monkeys and red-legged sun squirrels are flying and running around. Your ornithological guide Joe will point out and identify the birds for you and also explain special species of this region.

D/FB Rondo Retreat Centre in the middle of the forest. They don’t sell alcohol, but you can bring your own which can be bought on the way

Flora and fauna of East and West Africa meet here. 330 bird species are recorded and and you will find species from both regions, which makes the area incredibly interesting and rich in birdlife. You will also encounter birds that have a small distribution area. You undertake long walks during your stay; one day in the part where Rondo Retreat stands, the other day further north in an area managed by Kenya Wildlife Service. A local guide will additionally help in finding elusive bird species, it’s not always easy to spot them in the forest and good ears will help. Special species to look for are the Blue Turaco, different barbets and finches.

It is a very long but lovely scenic drive. After leaving Eldoret town behind you, you pass Elgeyo Marakwet Escarpment where the Kenyan athletes train for their successes. Steep and with many bends the road descends into Kerio Valley where you stop to see the Kerio gorge. Steep again the road climbs up the Tugen Hills and with hairpin bends down into the Great Rift Valley. From this stretch you can see Lake Baringo already. You will reach the camp which is built on a cliff on the shore of Lake Baringo for late lunch. The afternoon is spent with your ornithological guide in the large compound which is teaming with birds. Believe me you don’t know which bird to put your eyes on!

The two days here are spent on a two hour boat ride, bird walks and short drives. The walks will take you to the cliff where you might see a verreaux eagle or falcon, to nearer areas, some within the camp and to Robert’s Camp where you can find magpie and bristle-crowned starlings among many others. The hot time of the day you spend in the camp with lunch and rest.

Since Joe grew up here he knows the area and the whereabouts of special birds very well. During the boat ride you will feed the fish eagle – be ready as the speed is very high. This is the most southern distribution point of Jackson’s hornbill and northern masked weaver. Other birds you can find are purple and goliath heron, cuckoos, northern crombec, Madagascar bee-eater, starlings, tits whydahs, woodpeckers and many more. You will get a list also for this area. Very interesting is finding the pearl-spotted owlet, Verreaux eagle owl, African scops owl, northern white-faced owl, three-banded or Heuglin’s courser and the slender-tailed nightjar. Local guides will have found them for you to save time.

After an hour’s drive you reach Lake Bogoria with its hot springs and thousands of lesser and many greater flamingos. You will carry picnic lunch boxes and leave on time to reach the lodge on the north eastern side of the Aberdare range.

Breakfast early morning and then a stroll in the beautiful garden of the lodge. Then you proceed to see the Mackinder’s owl. A subspecies of the Cape Eagle-owl which only occurs between the Aberdare and Mount Kenya. Paul is the men who takes care of them. Educates the people not to poison them and checks if the breeding pairs are doing fine. Paul will take us to the owls. Not far is a pond where you can find the not often seen Black Duck. The entrance to the Aberdare National park is not far. Enjoy your picnic lunch before you start the game drive in the mountain forest. Look out for Hartlaub’s Turaco, Scaly Francolin, Crowned Eagle and other birds of prey as well as small birds. Usually near The Ark we meet the Giant Forest Hogs. D/FB The Ark – night observation lodge – watch birds in the spot light coming to catch insects at night

Mountain Forest, bamboo, podocarpus, rose wood and moorland are the vegetation zones you pass to get to an altitude of 2,900 m. Each zone has its special habitants; in clearings with leonotis plants you find sunbirds, in the podocarpus the red-fronted parrot (subspecies massaicus) and black saw-wings, in the moorland Jackson’s francolin, the endemic Aberdare cisticola, alpine chat, Reichenow’s serin and many more. Look out for the mountain buzzard which lives at high altitude. A picnic lunch will be taken at Fishing Lodge where a good number of birds always move around and are used to people.

Walk on the platform in front of The Ark looking out for the mountain species which can be found such as white-starred robin, mountain yellow-warbler, eastern mountain greenbul, also called black-headed mountain greenbul, and eastern double-collared sunbird. Around 10.30 a.m. you start the journey to Sagana Resort for lunch. Here the only locally occurring Hinde’s babbler has been spotted. From here you head to the international airport, a 4-5 hour drive to fit in with your onward flight. 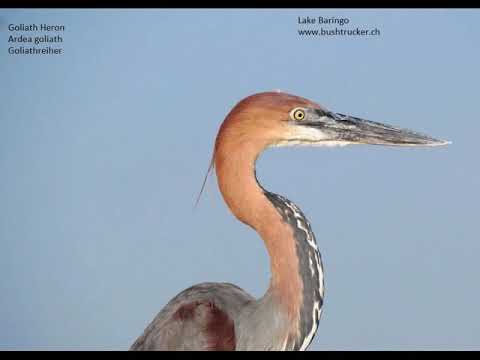 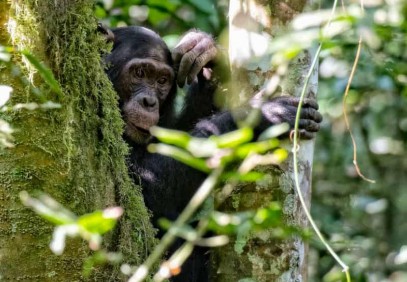 Explore Rwanda's Nyungwe Forest National Park in search of the endangered chimpanzees and an experience... 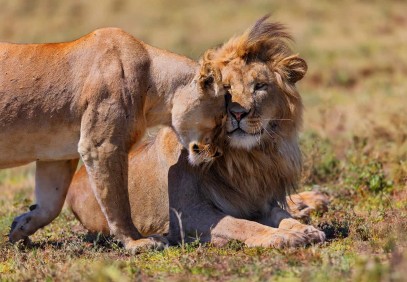 Explore Tanzania and experience the best of Africa with its unique wildlife and spectacular landscapes... 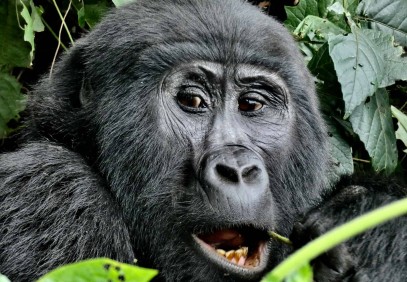 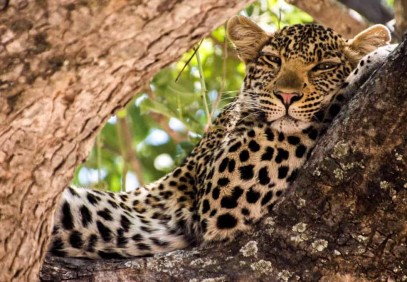 An exciting safari visiting the reserves in northern Tanzania, giving you the opportunity to see the... 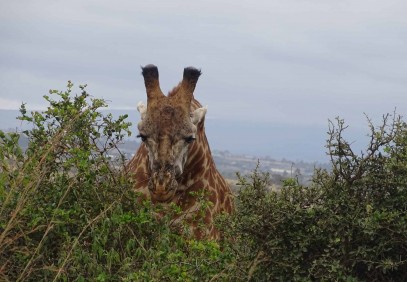 Experience the best of Kenyan wildlife on this 1-day trip into the Nairobi National Park for a chance... 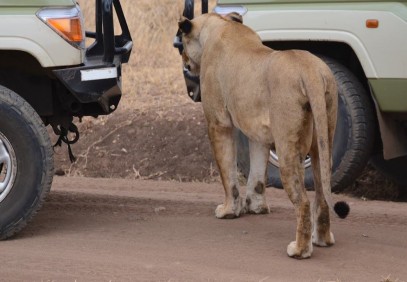 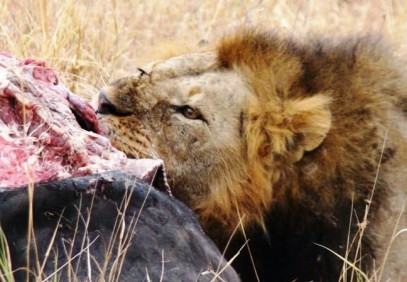 Explore northern Tanzania and discover three of its most famous reserves for the opportunity to see some... 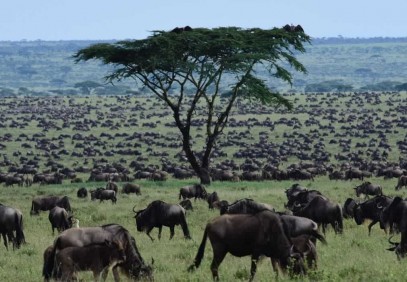 Witness an amazing spectacle as the largest herds of wildebeest give birth to their young simultaneously... 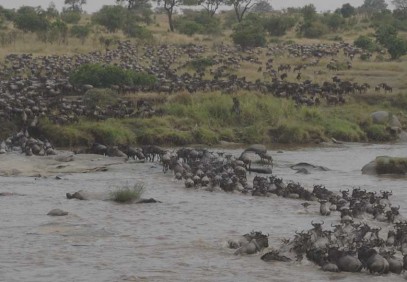 A photographic safari offering the opportunity to capture some of the most spectacular wildlife scenes... 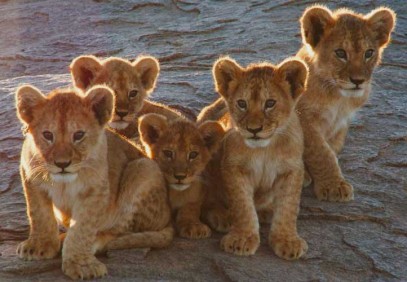