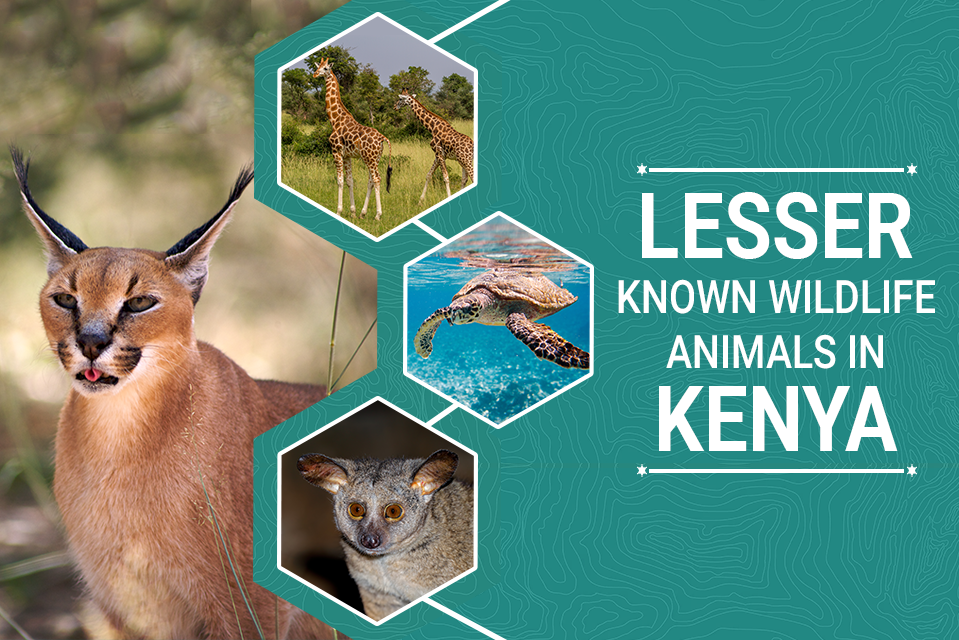 Kenya is amongst Africa’s top safari destinations known for its plentiful wildlife and diverse ecosystem. The majority of visitors hope to see the well-known Kenya safari animals on their safari, but there are some lesser-known safari animals in Kenya you might want to look out for too.

We have shared some of Kenya’s lesser-known animals that aren’t quite as popular as the big five but are just as essential a part of Kenya’s ecosystem. The list includes antelope species, birds, primates, and sea turtles. So, when you visit Kenya next time, keep your eyes open for these fascinating animals. 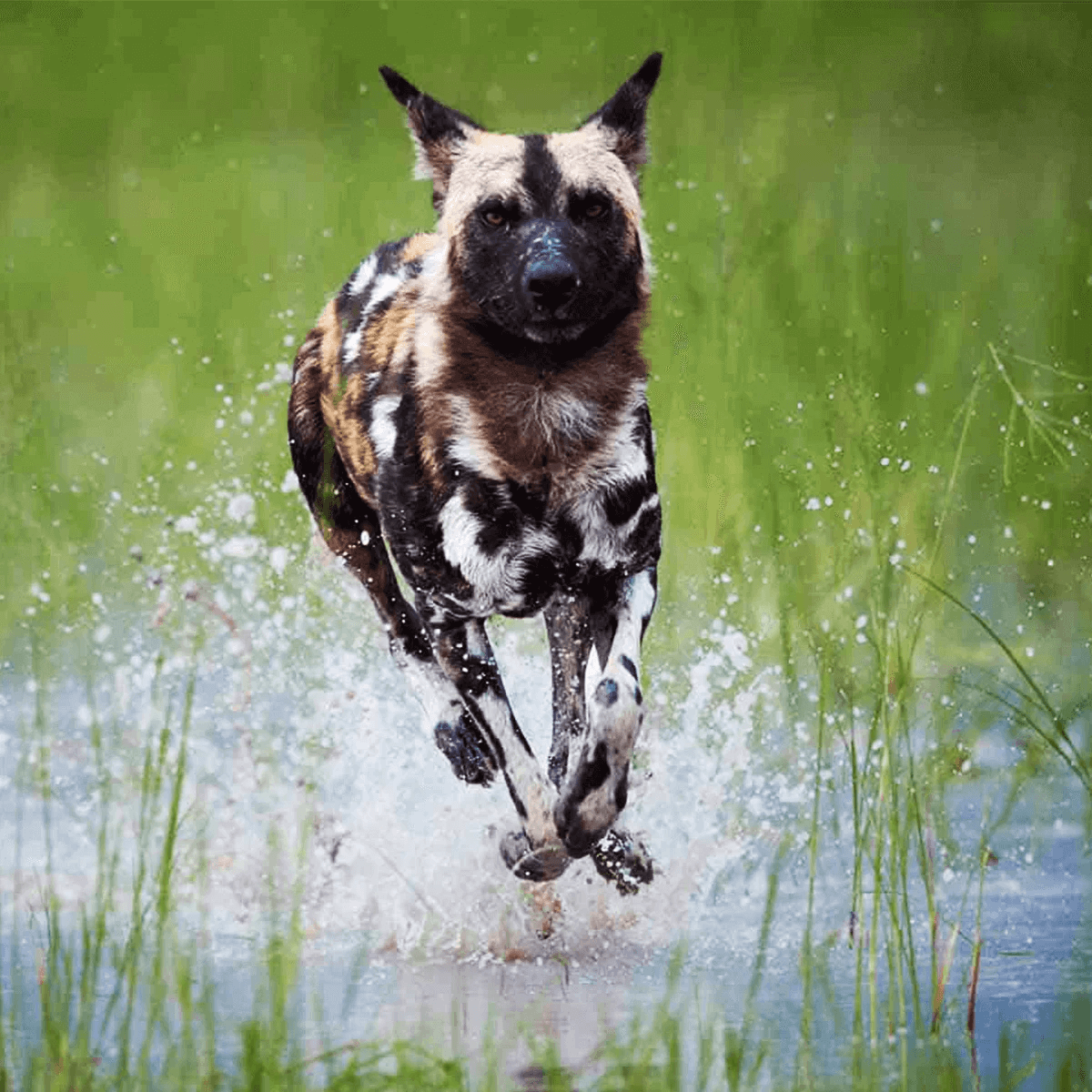 Kenya has a meagre and fragmented population of African wild dogs, one of the most endangered carnivores of Africa. Their reduced numbers are a result of poaching, habitat fragmentation, and infectious diseases. Conservation efforts have seen some increase in the numbers, but the progress is slow.

African wild dogs are intelligent pack hunters that can take down prey as large and bulky as zebras or as fast as gazelle. They are seen roaming the savannas and woodlands of subsaharan Africa. In Kenya, visitors can find them in the Laikipia region and Meru National Park. Their Latin name Lycaon Pictus refers to their appearance as a ‘painted dog’ due to their coat being adorned with black, white, and tan blotches. 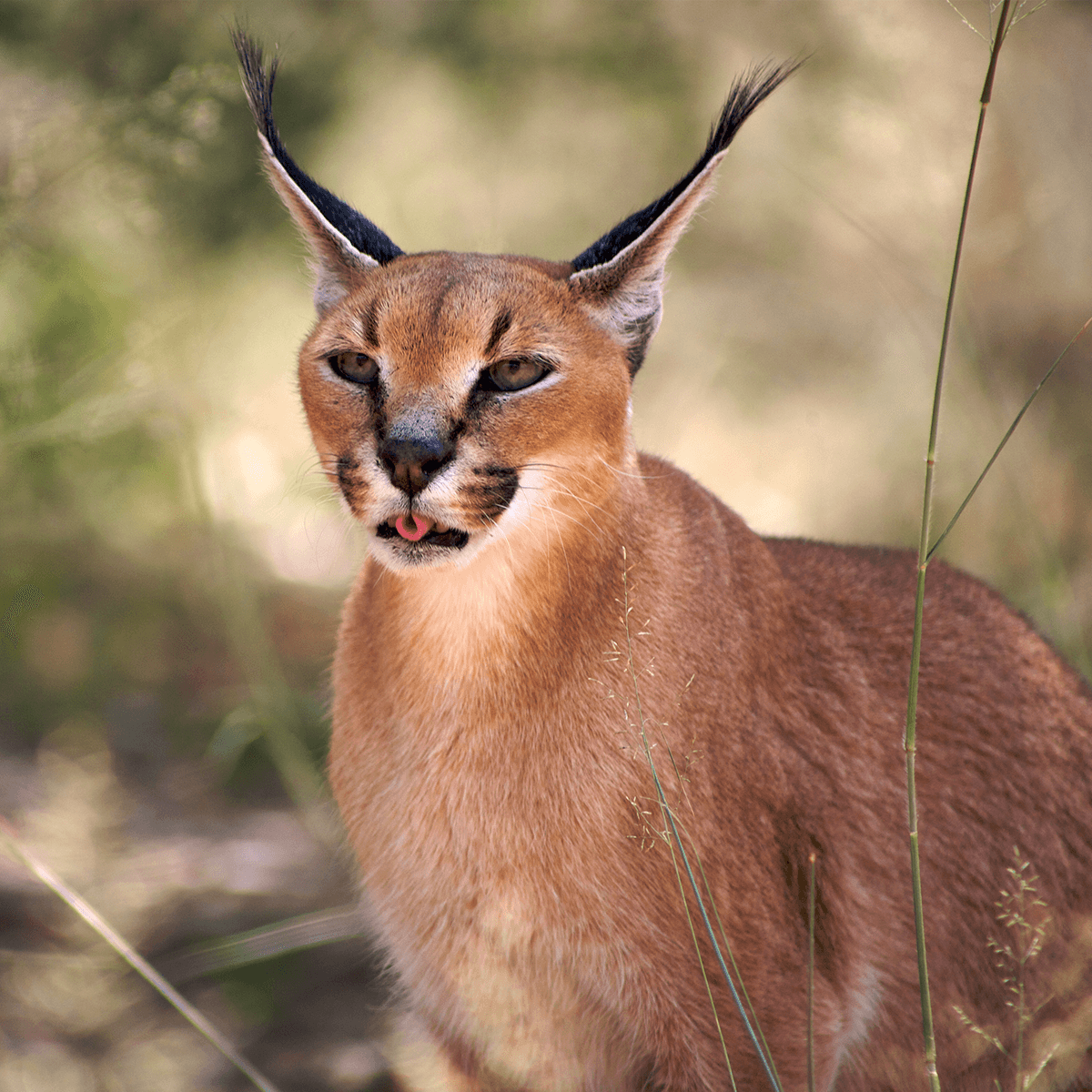 Caracal is one of the largest small cats in Kenya, also known as the desert lynx. Although it has no distinctive pattern or spots, the caracal coat resembles that of a lion while its primary identifying characteristic is its large tufted ears. Compared to its namesake, the spotted and broader lynx, the caracal has a slimmer profile with longer legs. However, the caracal does share its impressive agility with lynx and can leap 10 feet high.

Their fine-tuned listening skills allow them to anticipate their prey while its coat acts as a camouflage until it ambushes the birds. Their feet with stiff hairs offer cushion that further aids their ambush until it’s too late for their prey. The caracal sets its sight on a bird, leaps into the air, swats it from the air, injuring it, but it isn’t easy prey in any manner as the injured bird fights for survival while the caracal has to chase it to the ground. Their quick reflexes also help these fearless hunters take down prey as large as an impala.

As caracals are typically nocturnal, visitors can spot them during an evening or night game drive. Although caracal can be seen all over Kenya, here are some Kenyan destinations where you are likely to spot them: Arabuko-Sokoke Forest, Maunga Hills, Olorgesailie, Pelewa Hills, Shompole Swamp, Tsavo West and Tsavo East National Park.

Be inspired by our range of amazing Kenya safaris from our very best safari travel partners. 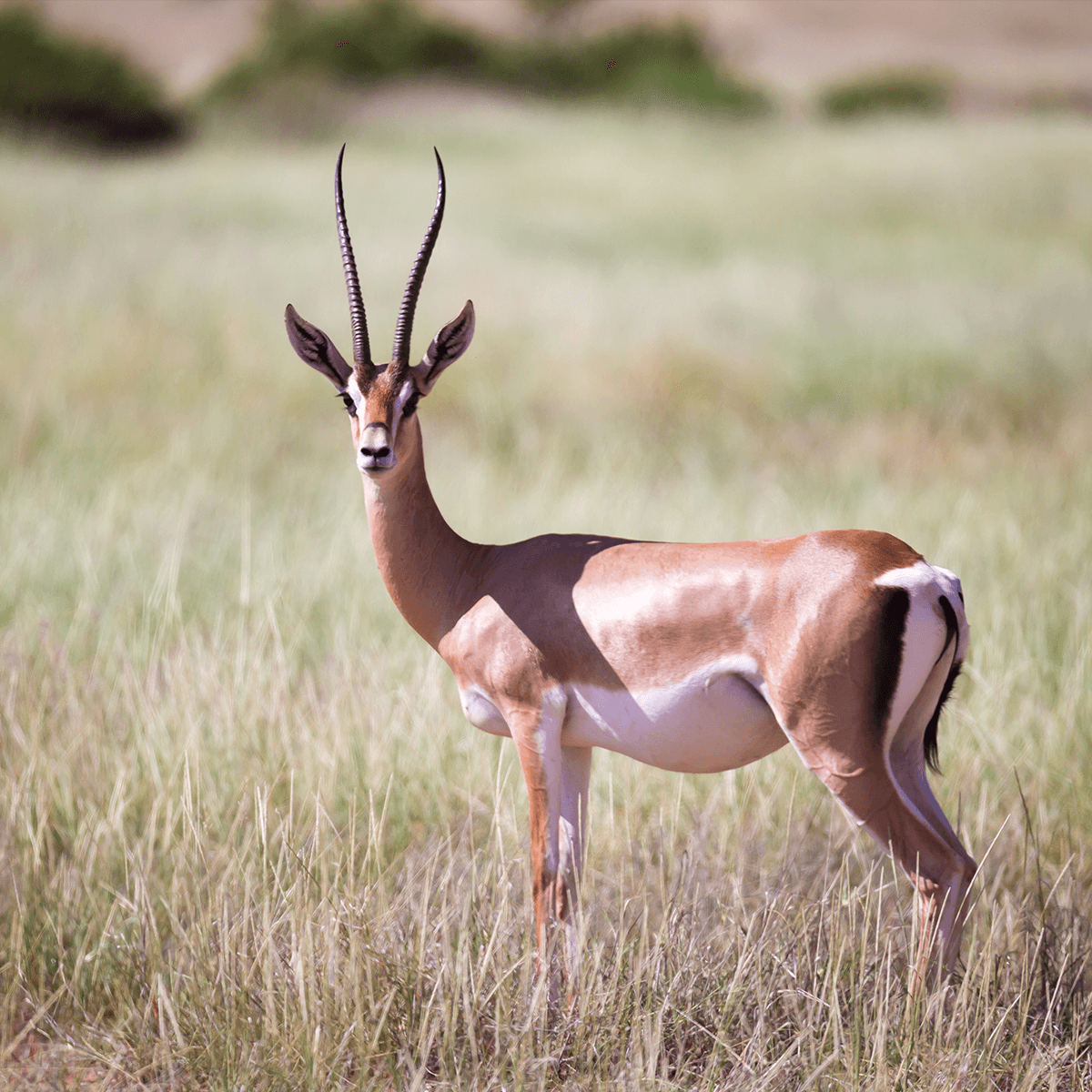 Gerenuk, also known as giraffe gazelle, is an antelope species aptly named for its appearance. It is a cross between a giraffe and a gazelle and at first glance, the gerenuk might look a bit bizarre. Although not as tall as giraffes, they do have an unusually long neck that seems out of place with their body proportions which are similar to other gazelles.

In addition, they have long limbs that allow gerenuks to rear up and reach for leaves and shoots that other antelopes cannot reach. A sexually dimorphic species, it is easy to distinguish between the male and female gerenuk. The male gerenuk has impressive lyre-shaped horns that are absent in the female of the species. 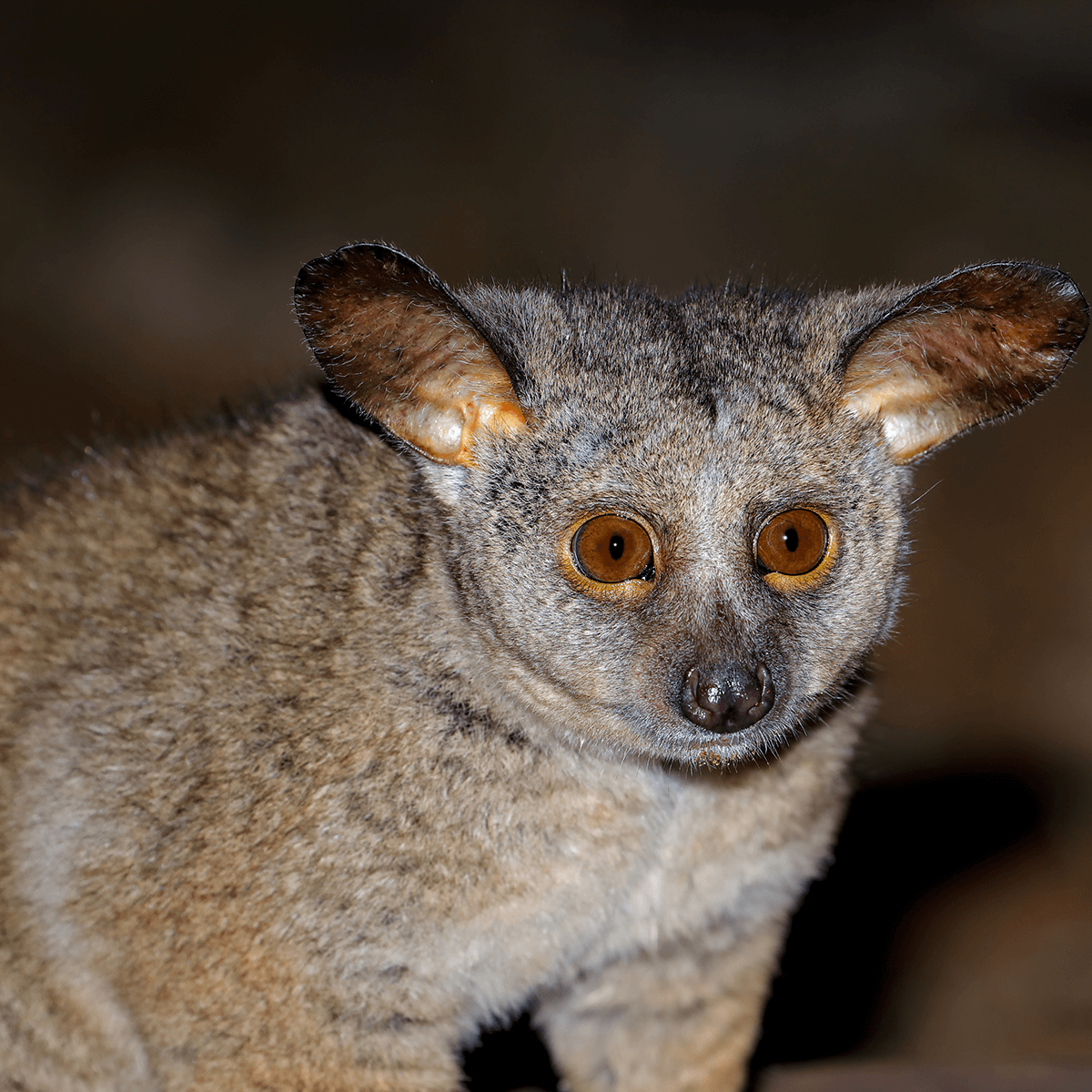 Galago is another name for bushbaby, which is a cute little nocturnal primate found on tree branches. They are also known as nagapies which translates to ‘night monkeys.’ Their distinctive large eyes provide them with good night vision. Like other primates, the galago’s tail helps it maintain balance on the trees while their acute hearing allows them to find insects in the dark. They are foragers who scour the trees, looking for insects, fruits, small animals, and tree gums.

You are bound to come across them when you shine a light into a tree on your night game drive. Even a spotlight of your vehicle will help you spot galago holding on to tree branches staring at you with shining eyes. But they tend to shy away from the spotlight so, you might only catch a glimpse before they find privacy.

For all the appearances of tiny teddy bears, they are really agile and can jump 6-7 feet high. It helps them snatch insects from the air, quite like frogs, but the galagos are more agile than even frogs. You can find the galago in Kenya’s well-known reserves such as Lake Nakuru National Park and Masai Mara Game Reserve. 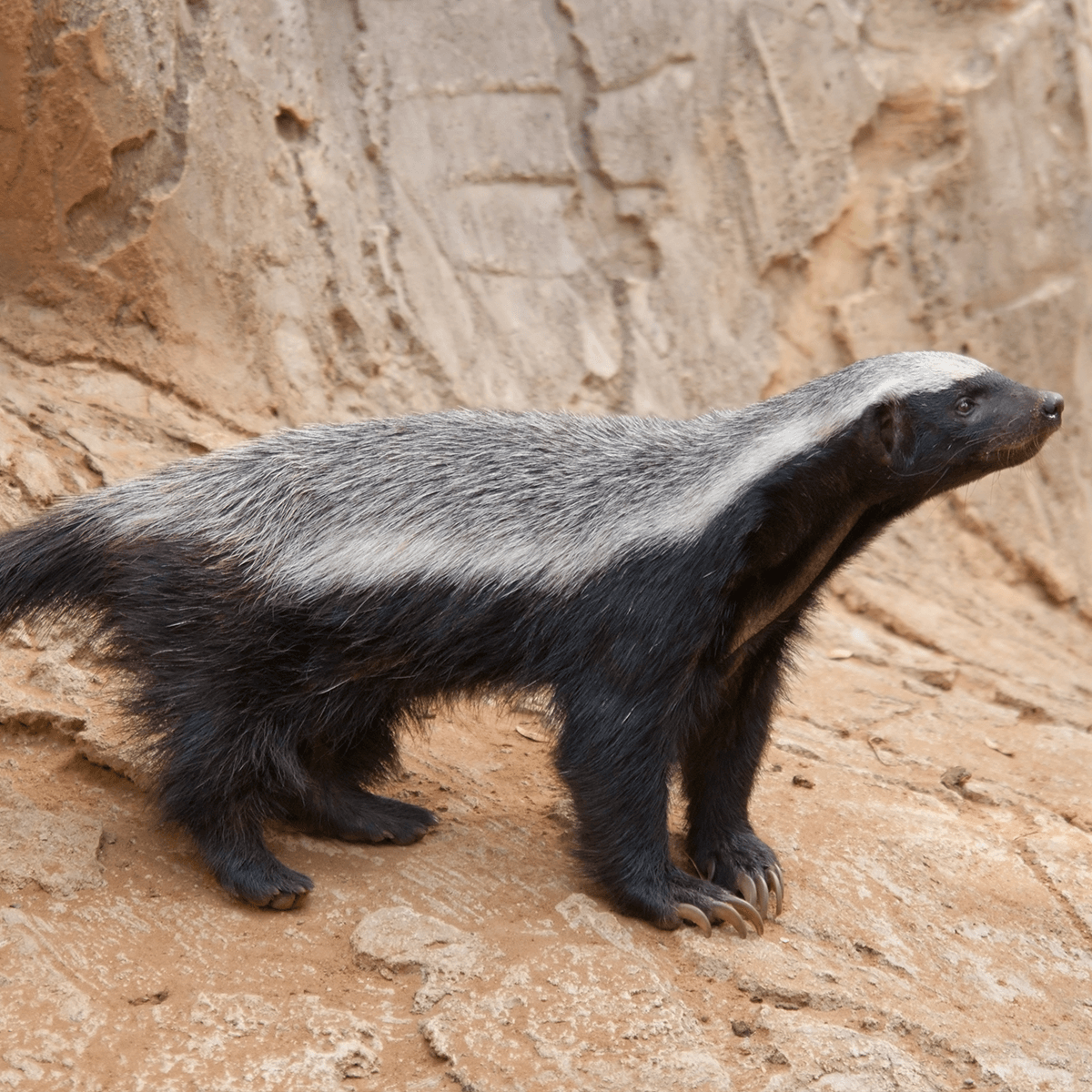 Honey badgers get their name due to their love for honey. It has nothing to do with their temperament, which is anything but sweet. They dig into the honeycomb, braving stings until they get their prize which includes honeybee larvae. They are ferocious creatures who have no compunction chasing away big cats like lions. They are so agile they can slip the grasp of a hunter and bite their attackers on the nose, shocking them into dropping the badger. A force of nature, honey badgers are fearless, they can take down a crocodile and once in a while, have even been known to prey on venomous snakes like cobra, black mambas and pythons.

Honey badgers feed on little creatures such as frogs, lizards, rodents, and turtles. They also feed on bird eggs, even ones as large as ostrich eggs. Similar to mongoose, they have developed a strong immunity to poisons, which makes them unstoppable. Their diet also includes larger mammals such as antelope, foxes, jackals, and wildcats. 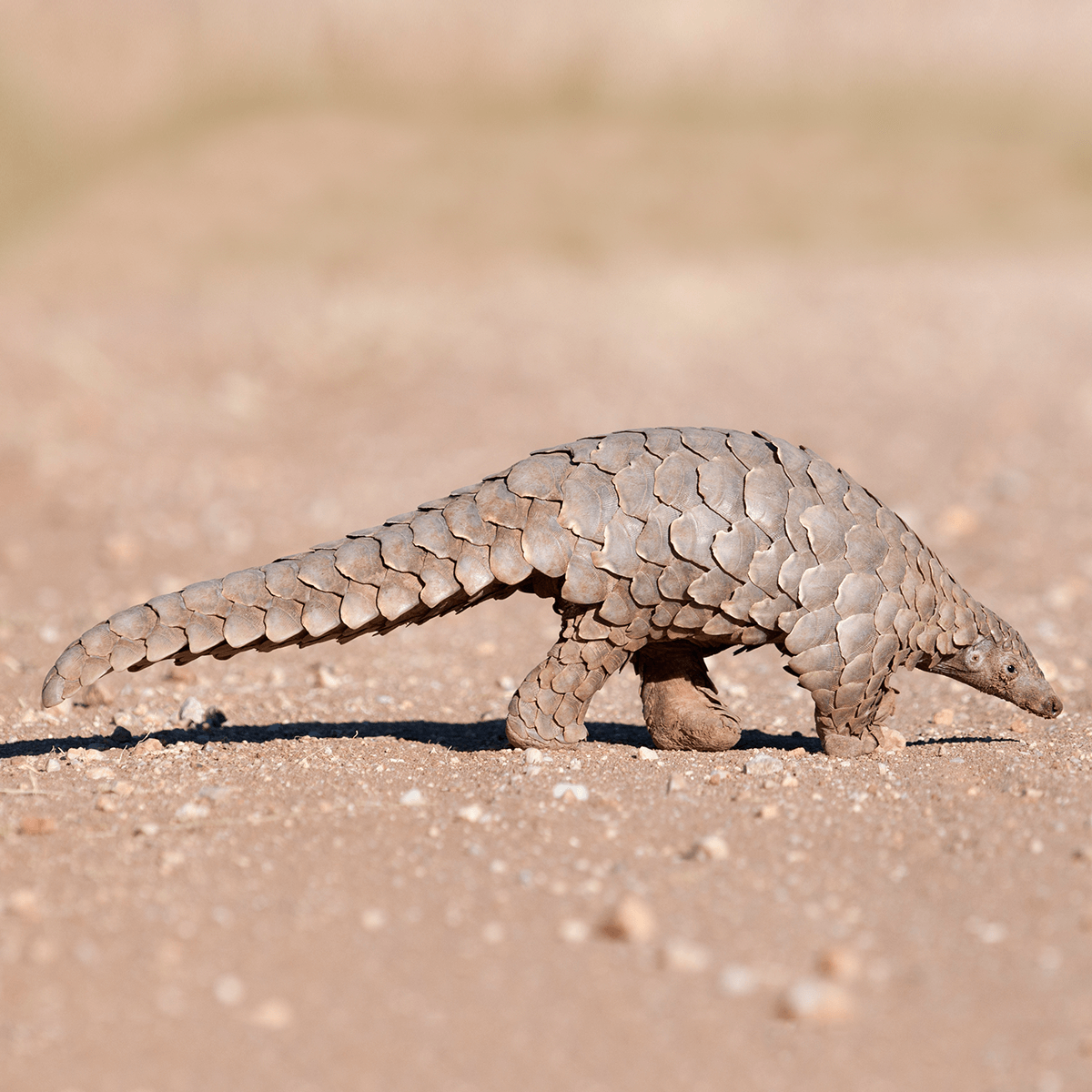 Pangolin is a threatened species, with some of its subspecies on the edge of extinction. They are believed to be the most trafficked mammals in the world. The Pangolin Project in Kenya is dedicated to the survival of pangolin in their natural habitat. Such conservation efforts are all that lie between pangolin’s survival and extinction.

People on Kenyan safari are dazzled by the big cats and elephants that they rarely think about pangolins, but, pangolins are just as much a part of Kenya’s ecosystem as the big five. Due to the threat to their survival, pangolins are heavily guarded, but if you are really lucky you might be able to see them in Amboseli National Park, Chyulu Hill National Park, Masai Mara Conservancies, and Nairobi.

Most pangolins are nocturnal creatures. They spend the daytime slumbering curled up into a ball with their scales acting as a shield. Their diet consists of ants and termites, which they consume through their long tongue. However, they don’t have teeth, so they cannot chew although they often ingest small stones which grind up their food inside their stomach. 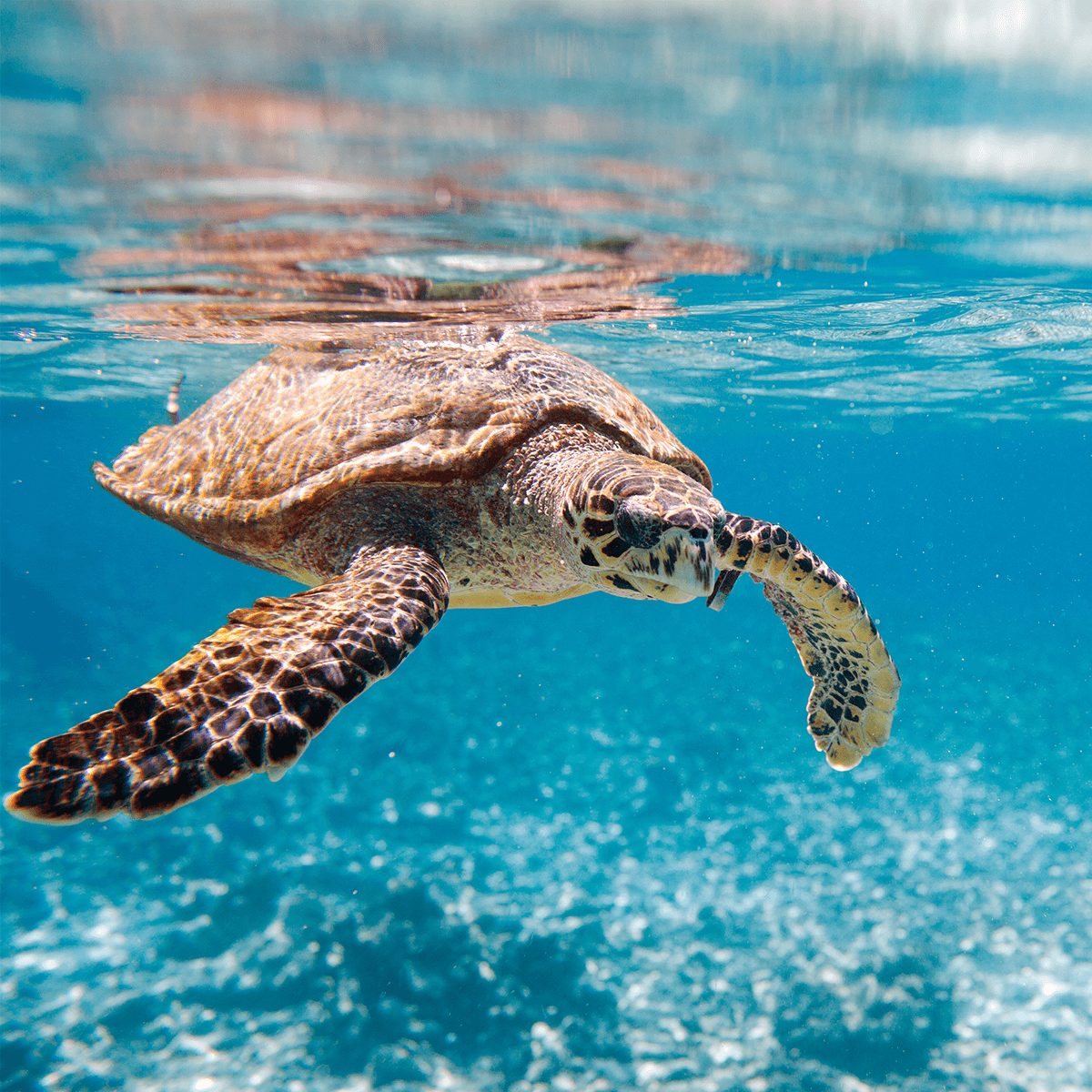 Kenya isn’t simply about the birds or the big five animals. It is also home to some of the most spectacular sea turtle species along its beautiful coastline. The green turtle, hawksbill turtle, loggerhead turtle, olive ridley turtle, and leatherback turtle can be seen in Kenyan waters while the Kenyan beaches offer a nesting site for the green turtle, hawksbill turtle, and olive turtle.

Kenya has several non-profit animal conservation programs like Local Ocean Conservation, which is dedicated to the protection and rehabilitation of sea turtles. Their projects include turtle watching, tagging and releasing trapped turtles, and caring for sick and injured turtles. They have a volunteer program which allows travellers to contribute to keeping these turtle species safe.

Rothchild’s giraffe was named after the world-renowned zoologist Walter Rothschild who first described the subspecies of the northern giraffe. It is also known as Baringo giraffe, named after Kenya’s Lake Baringo and Ugandan giraffe across the border in Uganda.

Conservation efforts such as the Giraffe Manor in Nairobi have ensured steady growth and is one of the ideal places to see Roghtchild’s giraffe. Visitors can also view Rothchild’s giraffe at Lake Nakuru National Park.